How to make Pleco into a Cantonese power tool

Pleco is an essential app for studying Chinese. It includes dictionary, document-reading, and flashcard functionalities. And given that it's available for both iOS and Android, it's much easier to lug around than《汉语大辞典》 or the like. (Though you can download 《汉语大辞典》 within Pleco and then you'll never be without it)

Most Pleco users are probably using it to study Mandarin (or English). However, Pleco is also equipped with excellent Cantonese functionality. This article walks you through how to get the most out of it, from customizing your Cantonese dictionaries to making it a Cantonese flashcard machine.

The first thing you need to do is make sure that Cantonese appears in the first place. From the main dictionary screen, tap the hamburger menu in the top left (it looks like ☰) and tap through Settings followed by Languages and Texts. 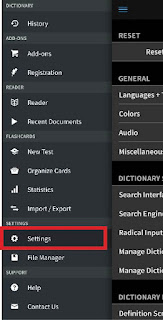 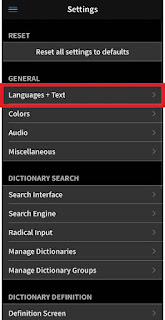 Next, scroll down to the CANTONESE heading. 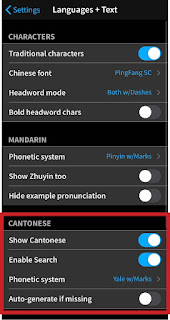 There are four settings to pay attention to here: 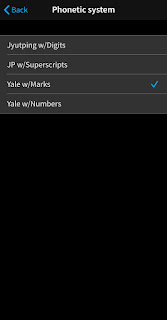 Once you've set up Cantonese to display, your dictionary entries should look something like this:

Here, "PY" stands for Mandarin pinyin, while "YL" stands for Yale Cantonese romanization. If you tap the little audio logo to the left of either one, you should get separate pronunciations, one in Mandarin and the other in Cantonese. Note that if you don't like the voices generated by your device, you can purchase additional Chinese voices in the "Add-Ons" area (see below).

Just as Pleco offers a variety of specialized dictionaries for Mandarins learners of various language backgrounds and research interests, it also offers specific Cantonese dictionaries. I highly recommend that you download a few of these, as they tend to offer different strengths and weaknesses. Some are free, others are not; you'll have to check Pleco to see what the current prices are. 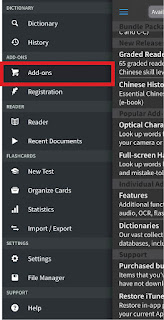 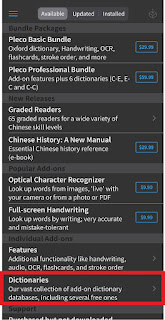 Next, go to Other Languages. 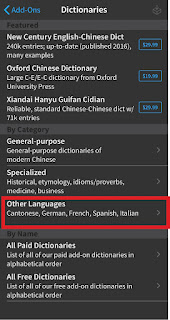 Depending on whether you have made purchases or not in the past, you should see a list of dictionaries beneath the CANTONESE heading with prices next to them. I can't vouch for the pricing at any given time, but I can give you my take on how useful each one is. If you are really interested in studying Cantonese, I think it's worth getting them all, but if you have more specialized interests, then some dictionaries will serve you better than others.

With 16,000 Cantonese words/phrases, there's a lot of valuable material here. The 15,000 context sentences in this dictionary are rich and colorful (though sometimes to a fault; someone was having a little too much fun writing dictionary sentences about gangsters streetwalkers). However, if you're a fan of Hong Kong films (especially from the 80s and 90s), many of the colloquial turns of phrase in this dictionary will make it easier to go beyond the subtitles and get a feel for the flavor of Cantonese as it has been spoken in Hong Kong in recent decades.

With 8,000 defined terms and 7,000 phrase/sentence-level examples, this dictionary is only useful if you already know Mandarin. If you look up a character or words, it gives you the definition in Mandarin. What's perhaps even more useful is the parallel sentences it gives in Mandarin and Cantonese that tease out the fine differences in usage between the two languages. If you are coming to Cantonese from Mandarin, then this is probably an excellent place for your to start.

This dictionary is very similar to the one above (GZH) in that it outlines the differences between Cantonese and Mandarin, except it has more entries (10,000) and examples (18,000). In fact, both dictionaries are from the same publisher (Commercial Press HK), but the overlapping entries are not always the same. I've noticed that where GZH almost always gives parallel sentence-level examples in Mandarin and Cantonese, GZP only sometimes offers that information; instead, GZP will often define a word in written Mandarin before listing a series of phrases in Cantonese that use that word,  but not necessarily with a Mandarin equivalent. I also find some of the supposed Cantonese usages to be a bit formal (e.g. when demonstrating 愛 as meaning 喜歡 in some situations, it offers up 愛看電影 instead of 愛睇戲), so make sure to cross-reference these examples against other dictionaries.

The Right Word in Cantonese (RWC)

Whereas the other dictionaries in this group tend to work Cantonese --> English or Cantonese--> Mandarin, this one is actually meant to be searched English --> to Cantonese. Its offerings are modest—only 6,500 entries—but they are quite useful if you are indeed looking for "the right word" or phrase in Cantonese. Not sure how to express "as soon as possible?" Try 盡快. Or maybe planning a trip to "Deep Water Bay?" 深水灣.

Based on a project over at Cantonese.org, this dictionary with over 25,000 entries is free and open source. If you download Pleco, then you really have no reason not to download this (unless you're running out of space, in which case go delete something else). This dictionary fills a lot of gaps and makes sure to point out when a common character/word has a different meaning in Cantonese than in Mandarin. However, the definitions are quite basic, and it doesn't offer as much in the way of context sentences as other dictionaries. Since Cantonese sometimes has different syntax from Mandarin, I think it's wise to at least download one dictionary that does have more context sentences.

This dictionary is also based on a major linguistic undertaking, this one based over at Words.hk. If you're curious about the social context surrounding Cantonese preservation in Hong Kong, you can read more about the project in SCMP.

Essentially, the makers are trying to make the first digital Cantonese-Cantonese dictionary, meaning words are defined in colloquial Cantonese rather than in written standard Chinese (which is how most existing Chinese-language Cantonese dictionaries approach the matter). The ample amount of Cantonese text makes this resource great for practicing Cantonese reading. Furthermore, it includes English translations of the definitions and ample context sentences. I love this tool, and I think most Cantonese learners can get a lot out of it.


Make the most of your studying with Pleco flashcards

Once you've looked up all this new Cantonese vocabulary, you'll certainly want to review it. Pleco offers a flashcard functionality bundle (just go back to the Add-Ons section you went to to find the Cantonese dictionaries). Pleco also has a great tutorial for this. You can quiz yourself in a variety of ways, including fill-in-the-blank (character or romanization), tone practice, stroke order, and multiple choice.

If you decide to experiment with Pleco's Cantonese functionality after reading this post, please let me know how it goes!