Site name:Glossika
UI Language:English
Cost:Check here (at last check, monthly subscription was $30 USD and annual subscription was $299.88; however, Glossika sometimes runs 30%-off promotions, so keep an eye out for those); there is also a 7-day free trial
Cantonese romanization system(s):
Jyutping and Yale

Glossika is a language-learning website that offers more than 60 different language courses. Along with popular staples likes Spanish and Mandarin, the site offer an impressive number of courses in lesser-taught languages ranging from Latvian to Welsh to—you guessed it—Cantonese (they also offer Wenzhouese, Hokkien, and two forms of Hakka for those of you hungry for more Chinese languages). Although it has its shortcomings, the Cantonese course is incredibly thorough, providing excellent recordings of every sentence by a native speaker and idiomatic renderings of common conversational phrases. If your goal is to improve your awareness of Cantonese pronunciation and tones, I think this is one of the best self-study tools on the market. However, it doesn't explain individual vocabulary or grammar, so it should be approached as a supplement to other resources.
Unlike so many other language-learning softwares that focus on teaching through smartphone apps, Glossika is desktop browser-based (most of its functionality still works on smartphone and tablet browsers, save for its audio recording feature). Glossika's main appeal is that it targets all four primary languages skills—speaking, listening, reading, writing—as you study. It also teaches you sentence-by-sentence rather than word-by-word, meaning the focus is on vocabulary in context. All Glossika courses are split into five difficulty levels (A1, A2, B1, B2, and C1). Over the entire Cantonese course, you can expect to encounter over 4,000 unique sentences and more than 3,500 new words.
Glossika runs in two modes: "Learn New Items" and "Review." When first starting out, you'll start with "Learn New Items" in order to add sentences to your memory bank.
Learn New Items
The system teaches you five new sentences at a time, and usually they revolve around a common topic or grammatical construction. For example, here's a set from A1 (the earliest level):
In the example above, the theme is forms of negation. Note that the earliest sentences you learn in A1 are often only two or three characters long, while the sentences in C1 can be quite long and complicated.
When you learn a new sentence, you're presented with its English meaning, the traditional Chinese character rendering, the Jyutping romanization, and the Yale romanization. You'll also hear the sentence spoken aloud (you can choose whether you hear both English and Cantonese or just Cantonese, as well as the speed of the recording). Your job is then to retype the sentence using Chinese characters or one of the two romanization systems. I generally recommend typing in one of the romanization systems, as this helps you internalize the pronunciation and tone. Although typing in Jyutping or Yale can feel clunky at first (especially due to the need for a numeral at the end of each syllable to indicate the tone), after a few days I found my fingers adjusting to constantly darting up to the top row of the keyboard. 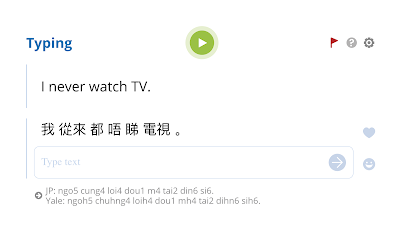 If you mess up the romanization at all, the text will turn red and you'll have to correct your answer before you continue. This can be frustrating at first—you'll likely forget a numeral here or there or drop a long vowel. It takes practice. Once you submit a correct response, Glossika will prompt you to record your own speaking of the sentence in question. The site stores your most recent recordings, meaning you can go to your phrase bank to check if your pronunciation is improving and compare it to the recording of the native speaker.
After your first encounter with a term, the second encounter shows the English and Chinese character text only. That leaves you to remember what the romanization was. If you mess up, it will show the romanization again, while also adding another required "rep" to your quota before you can pass out of the round (rounds usually last 25 reps, but you can skip reps if sentences become too easy). You generally have to go through five error-free encounters with each new sentence before Glossika deems you ready to move on to a new set of five.
Review
In review mode, you'll encounter sentences you've previously studied. Reviews are spaced such that you might not be reviewing every sentence you've learned every day, but rather at a frequency optimized for drilling the sentence into your long-term memory. As your familiarity with a term improves, the review formats get harder. They include dictation (meaning you get only the audio and no visual prompt) and interpretation (meaning you get an English sentence and are encouraged to speak aloud a sentence you previously learned that roughly matches the meaning). 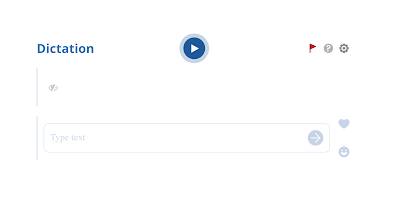 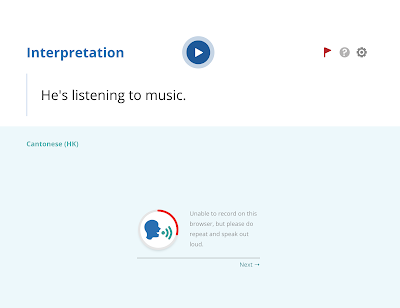 The review mode only works, however, if you're regularly interacting with Glossika. Otherwise, the number of reviews can pile up to the extent that they become slightly overwhelming. Also, because the "Learn New Items" mode cycles through sentences so quickly, you're only going to improve if you make a routine out of using both of the course's modes. Glossika recommends learning new items in the evening and then doing reviews in the morning. I prefer to start a day's session by reviewing and then transitioning into learning new content. Honestly, I think you can do whatever suits your brain best.
One of the other nice features provided by Glossika is its progress-tracking functionality. There is a bank where you can see all the sentences you've encountered before, their renderings in the different romanizations, and your most recent recordings. A little progress bar measures how embedded the phrase is in your memory. Elsewhere, Glossika displays your total number of reps for Cantonese and the time you have spent studying it. The site will even send a progress summary to your email inbox every week to help you reflect on your progress.

As mentioned earlier, Glossika does not explain grammar or vocabulary much at all. This meshes with the system's philosophy of immersion in sentences that a native speaker would feasibly say. However, I don't think I would have gotten as much out of the service if I had not already studied the fundamentals of Cantonese grammar and came in with some vocabulary knowledge. I would advise people to wait until they have studied Cantonese for at least 3-6 months before adding Glossika to their regimen.
I love Glossika because of how thoroughly it drills pronunciation and tones into your head. By repeatedly typing out romanization of sentences, I felt like I grew more attuned to differences between short and long vowel sounds (e.g. ai vs. aai) and the contour of entire sentences. I also got much better at recognizing tone changes, one of the most difficult aspects of Cantonese; whereas Mandarin has fairly fixed instances in which a tones shift (e.g. when there are two third tones in a row), Cantonese can be frustratingly erratic. Glossika is quite accurate in reflecting Cantonese tone shifts, forcing you to internalize them as well (e.g. 話 being wah when used as a verb but wá within words for languages, like in 廣東話). It's so rare for a large language-learning platform to give much attention to Cantonese at all, making the level of detail here hugely appreciated.
That being said, Glossika comes with a steep price tag, and it might not be worth it to everyone. However, one subscription gets you access to all their language courses, so if you are currently working on reviewing multiple languages, I think there is a lot of value to be found in using it, especially if you are studying a language that uses another alphabet. (I have been working through the Korean course as well and found my hangul typing speed much improved.) You could also use Glossika as a gateway toward pushing your linguistic comfort zone given the huge number of languages on offer. Manx, anyone?