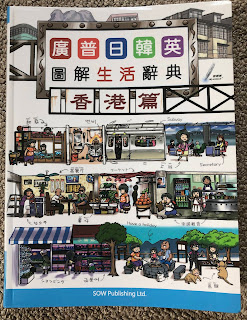 What this book is good for:
Building vocabulary

I love this book. Here is a resource that not only contains a wealth of Cantonese vocabulary, but if you study/speak any of the other four languages listed in the title (Mandarin, Japanese, Korean, or English), it also helps you learn Hong Kong-specific terms in those languages as well.

Note that since this is a dictionary, it is not the best standalone resource for learning the Cantonese language—there aren’t explanations of the grammar, romanization, or final particles. This should be bought as a supplement to another book or Cantonese course, or just as something fun to flip through or find flashcard inspiration. 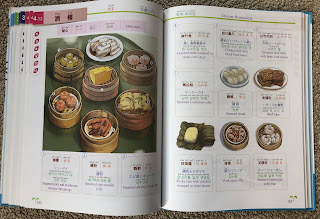 The book organizes vocabulary into five units: Basic, Living in Hong Kong, Shopping in Hong Kong, Eating in Hong Kong, and Having Fun in Hong Kong. While the majority of the entries are focused on standalone words (e.g. Antacid, Yau Tong MTR, pork liver), there is also a handy assortment of stock phrases and sentences (“Could you give me a discount?”—> Yau5 mou5 dak1 peng4 di1 a3?).

As alluded to earlier, the Hong Kong-specific vocabulary is incredibly useful for anyone living in the SAR. Of great use is the food section (with individual pictures) articulating everything from fermented and salted soybean to various varieties of dim sum. There is also a handy list of MTR stations, though since the book was published in 2016, it is missing newer stations, particularly those on the South Island Line.

Mandarin speakers who grew up or studied in mainland China will get additional use out of the book’s use of simplified characters for Mandarin listings and traditional characters for Cantonese. This makes navigating Hong Kong signage much easier, while also drawing attention to the notable differences between Cantonese and Mandarin usage (e.g. 對 vs. 双 as the appropriate measure word for items that exist in a pair). 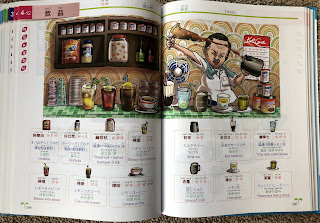 The book markets a companion product known as a “MyVoice” smart pen (智慧筆 in the Chinese-only marketing material). I have not tried this, but apparently the pen pronounces all five languages used in this book. It also has a recording function that allows you to listen to your own voice upon playback so you can adjust your pronunciation. It sounds nice, though I think you can achieve a similar effect by combining the (free) Google Translator smartphone app with a voice memo app on your smartphone.

I noticed a few small typos in the English (e.g. “Perface” instead of “Preface”) and an unusual choice of measure word in the Korean, but I don’t think they detract from the overall product. Slightly more frustrating is that the index in the back only has a Jyutping iteration, making it hard to look up words by English/Mandarin/Japanese/Korean—for those, you basically need to have a vague sense of where a term might fit into a given unit.