App name:
RTHK On The Go 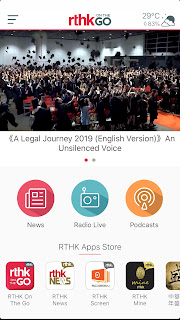 According to a foreign professor I met in Hong Kong, a true test of a person's Cantonese is whether they can listen to the RTHK morning traffic report and give accurate commute recommendations based on what they heard. It's certainly a creative metric for fluency, though perhaps a little incomplete. I think you should also be able to listen to one of the morning shows (e.g., 瘋show快活人) and give an accurate summary of the latest celebrity gossip. But to each their own...

RTHK stands for Radio Television Hong Kong, and it has been a major source of news and entertainment in Hong Kong since 1928, operating seven radio channels (though one is mostly a stream of China National Radio) and three TV channels (though one is just a live stream of CCTV1). RTHK On The Go, which is available on both iOS and Android, allows for easy streaming of RTHK Radio's seven stations. 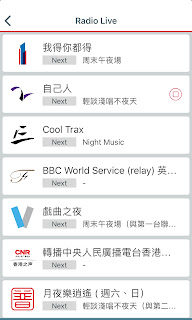 Above: RTHK On The Go station selection screen

Some language pedagogy experts say you need to be exposed to a high volume of auditory input in a target language before you really grasp its sounds and syntax (credit to Spongemind, a bilingual podcast for Korean and English learners, for bringing this to my attention). RTHK On The Go can certainly get you there without you ever having to set foot in Hong Kong (though I recommend you go). You can just leave it playing in the background while you cook, exercise, whatever, and you have a steady stream of Cantonese content.

There is incredible diversity of programming across the RTHK stations, ranging from news briefs to talk shows to Cantonese opera performances. These expose you to a variety of accents and voices, which is important if you are only used to the sound of your textbook CDs or Cantonese teacher. My favorite moments are when listeners call in—sometimes an 8-year-old with a cute story of domestic conflict, sometimes an 80-year-old man wishing a friend happy birthday—and you get a brief look into the life of a Hongkonger you've never met.

RTHK radio offers an additional challenge (opportunity?) for Mandarin speakers in that there are ample instances of celebrity interviews with people from mainland China or Taiwan who can understand Cantonese but not speak it, resulting in trans-lingual dialogues that keep you on your toes. These get more confusing when there are roundtable discussions between three Cantonese speakers, two Mandarin speakers, and a random person who switches in between. But if you can keep up, kudos to you—you're two thirds of the way toward living a Wong Kar-wai film (you need to pick up Shanghainese to reach 100%).

For those with political matters on their mind, RTHK does a fairly strong job of bringing in perspectives from all sides of the Hong Kong political spectrum. Indeed, despite receiving public funding, it is not entirely a shill for the establishment. It also offers programming in English (as well as other minority languages in Hong Kong, like Hindi), meaning if your Cantonese listening is only getting you 50% of the message, there are other segments that can give you important news and cultural information in a language you prefer.

(other program suggestions are greatly appreciated!)